art of the everyday 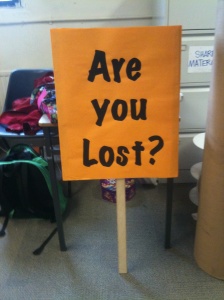 So taking a break while you write a PhD proposal is not the best way to keep up momentum. I began today having had the little push of Saturdays distribution but as reluctant as ever. Several people suggested that seeing I have to push myself to go out every day that maybe this style of work just isn’t for me. But the buzz I feel having gone out and done the distribution and the interactions and expressions of people passing let me know not only is this project a test for me but it is a test of the expectations of others.

This distribution is interesting following the last tract ( A love of Baking) as I am far more visible holding the sign and there is no novelty of free buns to ease the interaction. This tract asks are you lost? I held the sign above throughout my distribution and offered directions to those that asked. I stood at Cornmarket for todays distribution though I would like to try moving around a bit more to keep with the crowds.

The sign needs a little adjusting tomorrow as it is more difficult to hold than I anticipated especially in the wind but as a visual it worked really well. Several people stopped that were looking for directions the first a group of school kids wanted directions to a piercing shop I hadn’t heard of but I was able to direct them to another piercing and tattoo place which I know well. They seemed a little shocked that I would know somewhere like that but took their hand drawn map and went off to find it. One of the boys had no ID and was looking for somewhere that would pierce his tongue anyway.

The next person was looking for the Merchant and had spent an hour wandering around Cathedral Quarter without finding it, she took a hand drawn map to use tomorrow as she hadn’t time today to look again. After this I helped a young couple find JJB sports by looking it up online on my phone and another group of tourists to find Waring Street as they were looking for somewhere there to get something nice to eat.

A couple of women stopped to take my photo and several people commented on their way past with one boy saying “no, im not lost you have found me” Those that needed directions had no problem in asking and many fewer people took a religious connotation from this action than usual however those that did where really angered by the saying on the sign. I found this strangely pleasing as that is the same anger I feel when asked if I am saved.

If you are lost in Belfast keep an eye out for me and my sign I’ll do my best to give you directions.

evangelism as art/art as evangelism

I was invited to perform at the Creative Change Northern Ireland Exhibition today in Downpatrick. (http://www.creativechangeni.com) Bronagh Lawson had asked that I transport my practice to Downpatrick and I was really interested to test the work outside of Belfast.

I brought a selection of the tracts I have produced so far and set myself up at a bench around the corner from the St. Patrick Centre where the exhibition was being shown. In Belfast I pick locations used by street preachers or evangelists but I don’t know much about Downpatrick and so I picked this spot as it was practical and a nice mix of shade so I could see properly and sun so I wasn’t too cold. It was a popular spot as I was joined by two charity collectors during my hour and a quarter.

After a clumsy start which involved chasing some tracts down the street after they blew away I settled into my normal routine. I began to realise that although I still find giving the tracts out in Belfast scary, that I recognise a lot of the people who pass by and find this reassuring in a way. It is a familiar rejection rather than an unknown one.  In Downpatrick I felt a little lost. It was also odd as there are so many visible churches in Downpatrick and on my journey there.

A few people stopped to ask what the tracts were and one lady took a Love of Baking tract and sent her friend back to get the others, she thought they were all recipes and wanted the full set, I reached for the others to hand them to her but explained they aren’t all recipes so she walked away without a word!

A young man walked past and asked what they were I again was holding a Love of Baking tract and said it was a story and a recipe, he took it and when he passed by again later he said good work. Another lady stopped to say her grand-daughter makes buns but she doesn’t give them away she sells them. And she finished by saying how pleased she was to meet have met me.

When giving out the other tracts I felt more unsure of the reaction I would receive. It was obvious people recognised them as religious literature as so many people looked at them and moved away or gave dirty looks as they passed. I feel a little out of practice in giving the tracts out as I have given more time over to reading and writing than I have done for a while. I am waiting to hear if I will get an interview for a PhD which would allow me to continue this project and really build on its criticality and focus. Once I hear I will add the proposal i wrote to the blog, for now here are some images from today.

It was a relatively quiet day today, plenty of people took tracts, I handed out about 90 in total but people seemed busy and didn’t want to engage in conversation in general. I watched a couple of tracts being thrown away but the overwhelming response was to look at me then the tract then say no thank you. As I am watching the people go past I am beginning to see a pattern, older ladies take the tracts more readily than others, men take the tracts but often put them in their pockets without looking at them. Of course who accepts is affected by who I offer a tract to and my body language and approach to doing this. Perhaps I am most comfortable giving tracts to older women and this shows. I have to say I find it hardest giving the tracts to teenage boys, so many throw them away but I do not think that is the only reason. I feel I am most likely to be ridiculed by that group. Also the intended audiences for all the different people distributing leaflets or tracts or promo material are all very different and depending what I am perceived to be giving out it makes a difference who accepts.

I joined the free bible givers again today and am planning on contacting them to ask about what drives them to evangelise and what their ethos is. There was a real contrast by what I had assumed was my quite passive distribution and their method, they set a table up with all the literature they have to offer and then wait silently to be approached.

I have not really tried to stop people and chat yet, I mentioned previously I had addressed this with Andrea Montgomery in a tutorial but I feel the techniques are best used after I am approached by someone. I intend to address this reluctance to approach people fully in the tract. So tomorrow is my last day of tract 4.

Today was the toughest day, I began at 10 as usual and a local man stationed himself next to me and began to tell me all about how awful it is that people who aren’t from the UK end up begging here. He believed that the Romanians, often seen playing musical instruments in Belfast City Centre, had paid off City Hall so they would be allowed the run of the City. He also suggested that the accordion contained a tape recording and that the man couldn’t even really play the accordion. He was angry, very angry but this all stemmed from hearing that a local man who lived on the streets had been sent to jail for a week for begging. He insisted the man didn’t openly ask for money so he shouldn’t even have been accused of begging.

After this man wandered off a local church (Whitewell Metropolitan Tabernacle)  set up a healing station and played Christian music whilst preaching. This is the first ‘direct competition’ I have faced. Passersby assumed I was with this Church and I became aware that those who accepted my tracts told the other people handing out literature that they already had one and in turn told me that they already had literature from someone else in my group. I explained I wasn’t with them and when one man asked who I represented I simply answered ‘someone else’. I swapped a tract with one of the Whitewell group which felt very odd.

Several people were outspoken about not want tracts and I felt strange to have their annoyance directed at me. One lady in particular was very annoyed at the tagline on my tract raising her voice saying ‘For Goodness Sake, Why do they always go on about Hell, I go to Chapel every Sunday, I felt bad not taking a tract but she deserves it!’ Another man asked ‘it that religious?’ I began to say ‘well if you read it’ . . . he interrupted saying ‘no’ he did not believe me, assuming I was trying to trick him into reading it anyway and pushed past. However it wasn’t those who were annoyed that unnerved me it was those who genuinely accepted the tracts with a ‘God Bless you’ or asked for a tract and seemed in genuine need. Are there really people who get comfort from reading tracts?

The majority of people rejected tracts today and the rejection is starting to feel personal, if this was my faith how would I feel? would it strengthen my conviction that these people need reached by God and see the delivery as my burden to bear or would the rejection slowly discourage me?

I will return to Cornmarket on Monday 10-12 I am aware that leaves tomorrow unattended but I feel that as its Remembrance Sunday and the shops would not be open yet that a true tract giver would not be there on a Sunday. These excuses for not fulfilling my Good Intentions to be there everyday will be available on the voicemail so call +447933999268 and feel free to leave a message!